Kent Island Federation of Arts envisions a community where the arts play an essential role and people are transformed by the power of art and artistic expression.

2021 Kent Island Federation of Arts Board of Directors

Vice President: Judy Wolgast is a drawing instructor, a watercolor artist, and graphic designer. Judy served on the Board for 8 years, and as President five years from 2013-2018.

Secretary: Mary Ann Buckley started taking art classes at the senior Center in 2012 and was introduced to KIFA by Maureen Wheatley where Mary Ann was introduced to many mediums. She is still exploring all forms of art to find her niche.  She has taken watercolor classes, drawing, photo printing, weaving and acrylic poring classes at KIFA, and found all of them wonderful. She has served as a docent for 5 years and joined in exhibits and fundraising events. Prior to retirement, Mary Ann was a science teacher and principal for 45 years in the United States and abroad. She believes the arts are a vital part of our lives: we all have many pictures and sculptures in our homes. We all write and listen to music. KIFA provides exposure to all the arts and encourages the community to participate.

Treasurer: Margaret Tessier applauds the 58 years of history and volunteerism of the many women and men who paved the way and made the KIFA Art House the strong arts center that it is today. For Margaret, KIFA is a family affair; her mother-in-law Patricia Jones was a loyal KIFA member 1982-1986. Since 2016, Margaret has been writing KIFA’s grants and volunteering in general. Locally, she has held positions on nonprofit boards and has worked as an executive director, with strength specifically in nonprofit governance, grants, and fundraising. Formerly employed as a community college educator and costume designer, Margaret is now an oil painting student and employed as Director of Development at Queen Anne’s Arts Council.

Director Linda Jakubowski began studying art in high school and continued her studies with the Washington School of Art in New York.  She studied landscape painting in Ohio and still life in oils at Chesapeake College.  Since moving to the Eastern Shore of Maryland in 1991, she has studied with many well-known artists from the area and has taken many workshops to expand her knowledge of the different ways to interpret the subject matter with the different mediums.  She enjoys experimenting with different techniques and seeing unexpected results.

Director Marisa McAndrews is a History teacher at Kent Island High School and class advisor for the class of 2021. Currently she is finishing her Master’s in Education at UMBC in STEM education. Photography, painting, and sculpture are among her interests. Marisa resides on Kent Island.

Director Nancy O’Brien is a popular local artist and has volunteered as a teacher and board member for KIFA for many years. She served as Co-President twice over the years. She works in watercolor and mixed media. In her former life, she was a teacher and a business owner.

Director Rebecca Placek has been a KIFA member for nine years and a docent for eight years. In 2019, she served as the Corresponding Secretary, Docent Coordinator, and Gift Shop Coordinator. She served on the Publicity Committee and Art House Campaign. She will continue to serve as Docent Coordinator.  She does photo journalism for KIFA with The Bay Times and The Capital-Gazette. Her passion is photography.  She founded the Kent Island Photo Club eight years ago and still serves as President.

Director Joel Purcell, MBA CPA has served as a board member for years. In his previous life, he has served over 25 years as a Financial Director of Non-Profits Arts organizations, including a major Washington Museum, Opera Company, a Montgomery County Theatre and Education Foundation. Prior to that, he worked for a major Aero Space Corporation. His interest today is in photography. His professional training is in Finance and Accounting. His wife Penny has worked and supported the Quarter Auction Event along with Joel.

Director Dahye Riggs (Di) served as a Court Appointed Special Advocate in Queen Anne's County for almost a decade. She was the Minority Achievement Coordinator at Kent Island High School for five years, where she tutored students and assisted them with their college applications. Di graduated from UMUC with a Bachelor of Science in Psychology. She enjoys working out at her gym and spending time with her family. Her other interests include floral design and baking. She and her family reside on Kent Island.

Director Theresa Schram is a working artist and teacher specializing in oil and acrylic painting. She has been a popular children’s art teacher in KIFA classes and summer programs. Currently, she teaches Sunday Fundays classes for youth and an After-School program for children. Theresa is an artist based out of Easton. She is a graduate of Salisbury State University, with a Bachelors of Fine Art. Theresa has had multiple patrons and has shown and sold her work at numerous galleries and venues along the East Coast. She currently resides in Easton, MD and is affiliated with the Academy Art Museum, River Arts of Chestertown, the Queen Anne’s County Center for the Arts, Kent Island Federation of the Arts and Le Hatchery Galleria.

Director Maureen Wheatley has always been passionate and supportive of the arts in our Community of Stevensville.  As a working artist and a member of KIFA for 28 years, I have served as Gallery director for 10 years, Exhibit Coordinator, helped with various fund raising efforts as well writing grants, taught classes for all ages, participated in shows and Art Fairs at KIFA, coordinate with the A &E District Board, and even scraped and painted the gallery spaces, years ago.  As a member of different arts organizations, I bring to the Board an insight on the history of activities, and events that have been successful and not so successful, in those organizations and KIFA. 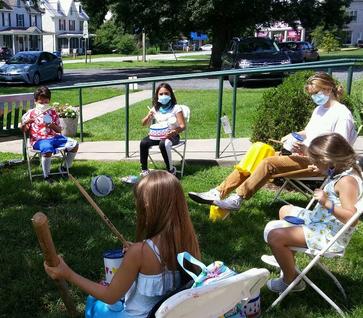 Exhibit space was limited to two rooms, so in 1983 the gallery was moved to its present location at 405 Main St., in Stevensville.  In 1985, KIFA purchased the lovely Victorian style house and became a landmark in Historic Stevensville.  By 1995, with 140 members, and the mortgage paid, KIFA was mounting eleven art exhibits a year with emphasis on art education and service to Queen Anne's County.  With a membership today of over 200 artists, artisans, craftspersons, and others who love and support the visual arts, KIFA continues to be a staple of the artistic and historic community.

KIFA’s main mission is to provide an opportunity for people of all ages to better appreciate the visual arts and to develop their own creative and artistic skills. We host exhibits as well as hold classes, member events, fun fundraisers, and summer art camps for children.  We pride ourselves on friendliness and inclusiveness.

We operate with the support of volunteers and especially with the help of our Docents who keep the doors open!  KIFA also has a newly expanded gift shop featuring beautiful handmade items by our local artists.

All KIFA events are open to the public, and everyone is encouraged to come and find out what we’re all about. For more information contact KIFA at 410-643-7424 or email us at info@kifa.us

Kent Island Federation of Arts, or KIFA, was founded in 1963 as a small non-profit community organization, built on making the arts accessible to Kent Island and the surrounding environs.

KIFA’s story began in the 1960s when a number of artist residents, realizing that there was no place locally where artistic work could be exhibited, formed a group to meet and mount annual shows of their work. The first show was in 1962, and by 1972, as a result of the enthusiasm of the original group, the Kent Island Association was formed.  In 1979, The Association was officially incorporated as the KENT ISLAND FEDERATION of ARTS (KIFA).  With 93 members, KIFA opened its first art gallery on Kent Island in an old house across the street from Christ Episcopal Church in Stevensville.

MISSION: KIFA is to enhance the cultural and artistic climate of Queen Anne’s County through diverse programming in arts education and arts exhibits, and by encouraging participation in and promotion of the visual arts, performing arts, and literary arts. We will provide equitable access to our people including Special Needs folks, Seniors, Veterans, and minority members of our community. Our aim is to assist in developing artistic skills through education and exhibits, and to improve the quality of life for all people in our community through the arts.

VISION: To increase our organization's presence in the Queen Anne's County community as an active "hub" and expand our contributions to our artistic community through improved opportunities for artists, art students, and those who simply love art. Along with other county arts organizations, the 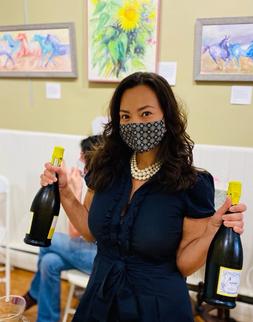